Munich – Juan Diego Sánchez, Official Design Partner of Virtual Competition Organisation (VCO), has been creating vehicle liveries for racing simulations and games for more than a decade. The Spaniard has made a name for himself under the pseudonym iLiveries. In an interview, he gives an insight into his daily work, talks about his career, which started in his childhood bedroom, and explains which racing game changed his life. He also reveals his favourite liveries in real-life and virtual racing.

Juan Diego, how busy are you at the moment?

Juan Diego Sánchez: “I’m currently working on various liveries at the same time. Usually, I have two projects on the go in parallel, sometimes even three. That enables me to switch between the projects while I’m waiting for feedback from customers.”

What is the standard procedure like – from a customer enquiry to the finished design?

Sánchez: “First, the most important questions need to be clarified, namely the price and the delivery time. Once that has been done, the project is added to a waiting list. Then, before I get started with the design, I contact the customer again and we discuss the specifications that the livery needs to meet. Then I can focus fully on developing the design. After that, I incorporate customer feedback or other ideas that often only crop up during the draft.”

What are the individual steps involved in designing a livery?

Sánchez: “Provided that the desired livery isn’t a replica, which has strict specifications, I start with a rough draft. I use this to define a basis. I always feel better if I have direct interaction with the customer while I am working on the project. The goal is to receive continuous feedback while I am implementing the ideas for the design. Sometimes it is a little risky.”

Sánchez: “Because I show the customer unfinished concepts that they might not like. Sometimes I rely on the trust and open-mindedness of the customer. They can accept the concept – or not. If it’s the latter, I have no issue starting from the beginning again and designing a new concept that the customer prefers. At the end of the day it is about providing the person paying with something that they are totally happy with.”

Do you have the freedom to bring in your own ideas in the draft?

Sánchez: “In most cases, I enjoy a high level of trust. When it comes to creating a totally new design, I can let my imagination run wild. My customers trust me one hundred percent. During the actual development, as already mentioned, the customer and I are involved in a constant exchange, but even in the case of a replica, there is sometimes a little room for manoeuvre.”

Even though the livery already exists?

Sánchez: “Yes, because I am often asked if I can adapt the livery of a particular vehicle to a different vehicle. For example, if I need to copy the livery of a Ferrari to a Porsche, there are different approaches for adapting the design flow to the specific vehicle shape.”

Do you have a clear vision of a draft before starting?

Sánchez: “In most cases, yes. Maybe not a vision down to the last detail, but definitely an idea of the direction it could take. But these ideas come automatically when I receive an inquiry and the relevant customer specifications.”

How different is your first idea from the final version?

Sánchez: “It’s impossible to give a definitive answer. The livery develops according to customer requirements, even if the idea provides a basis and the initial approach, but many minor details only emerge during development.”

How long does it take until your customers are happy with your suggestions?

Sánchez: “That can’t be generalised, and it always depends on the customer and on how particular they are. I have done drafts that only took ten hours, but then I have done others that took me more than a week.”

Are you characterised by a particular style?

Sánchez: “I’m not so sure any more. Up until about three or four years ago that was definitely the case. A few years ago you saw the craziest lines and compositions without any foundation or structure on the cars. My liveries were definitely very different to that. But these days the whole field of Esports racing has become much more professional. As a result there are a lot more designers now who are involved in the field. I can’t and won’t judge what distinguishes me from other professional designers. It might be better to ask someone who has worked both with other artists and with me.”

Do you see designing liveries as a hobby or a job?

Sánchez: “In reality it is my hobby that has become my second job. It isn’t my full-time job, but I hope that I will be able to change that soon. I’m a full-time software engineer.”

What triggered this passion for racing and liveries?

Sánchez: “I remember following Formula 1 as a small child at the end of the 1980s. I was always really fascinated by motorsport in general. I was also really good at drawing as a child so it was only a matter of time before the two passions would one day be combined.”

Can you still remember the first time that happened?

Sánchez: “When I was twelve years old, a friend and I reproduced the Williams Renault FW18 and the Benetton Ford B196 on my dad’s Macintosh Plus. We built really rudimentary software and used simple zoom and pencil tools to reproduce the design pixel by pixel. It was crazy.”

Sánchez: “I think that’s the kind of thing you can only do when you’re a child and have all the time in the world. The next milestone was the racing game IndyCar Racing II by Papyrus. Back then the game was amazing. There was an application that you could use to paint your racing cars yourself – pixel by pixel. I spent as much time designing the livery as I did actually racing. Then came games like NASCAR Racing and NASCAR Racing II, which also had that application, before a game was released that changed my life so to speak.”

Sánchez: “Grand Prix 4 by MicroProse. You were able to create mods. I downloaded some of those mods in various forums and was amazed at how amateur designers were able to design mods for the racing cars that were better quality than those in the actual game. At that time, in 2001 or 2002, I was working with Photoshop for the first time and started to learn how to use it.”

What was the next step?

Sánchez: “I met people who were able to create phenomenal 3D models, and quickly got involved in some mod projects, along with the fantastic modellers and illustrators. After a few years we set up a well-known modding group and worked on fantastic projects, although some of them were never released to the public. Even though it took up most of my youth, I’m very proud of that period. We built up a good reputation, which saw Slightly Mad Studios hire us on a freelance basis to design the textures for the Oreca LMP2 and the BMW V12 LMR for the racing game Project Cars. Even though I really enjoyed that job, it was difficult to stick to the deadlines because I was already working.”

When was your first experience of producing a complete livery?

Sánchez: “That was in 2009, for Formula Sim Racing on rFactor. Among other things, I was allowed to design the liveries for legendary teams like Precision Motorsports and Twister Racing, which made me really proud, particularly because many well-known sim racers such as Atze Kerkhof and Bono Huis were driving for these teams.”

Do you remember drafts or designers that particularly fascinated you as a child or a young person?

Sánchez: “No doubt I have forgotten a few now, but the ones that have really stayed in my mind are the designs of the Rothmans Williams cars, the Jordan Formula 1 car of 1998, the Martini Ford Focus from 2001, the Valvoline IndyCar of Gil de Ferran and the Jeff Gordon Dupont Chevrolet from 1996. But above them all is the McLaren West paintwork. As far as I’m concerned, that is the most elegant design there has ever been.”

Sánchez: “I’ve never designed a livery for a team in real-life racing, but I don’t think that there can be that many major differences. However, I do think that the professionalism in all areas of real-life motorsport is at a higher level than in the virtual world. Also, sponsors are more heavily involved in the design in real-life motorsport and really make sure that all CI specifications for the branding are adhered to. You have more room for manoeuvre with liveries for virtual racing and can make compromises to get a better looking design.”

In your opinion, what is the most attractive livery that you have ever designed?

Sánchez: “That’s difficult to say, because I have designed a huge number of liveries. If I’m only allowed to pick one, it would have to be the livery for SimRacing Channel.”

Are there designs that you aren’t as proud of?

Sánchez: “Of course there are, but I’m not going to reveal those.” 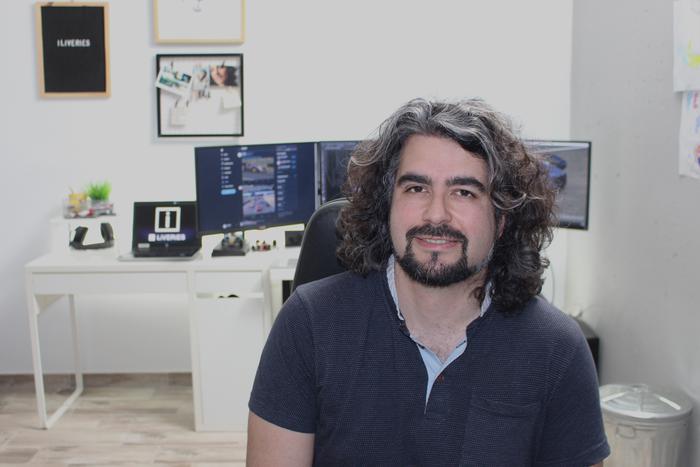 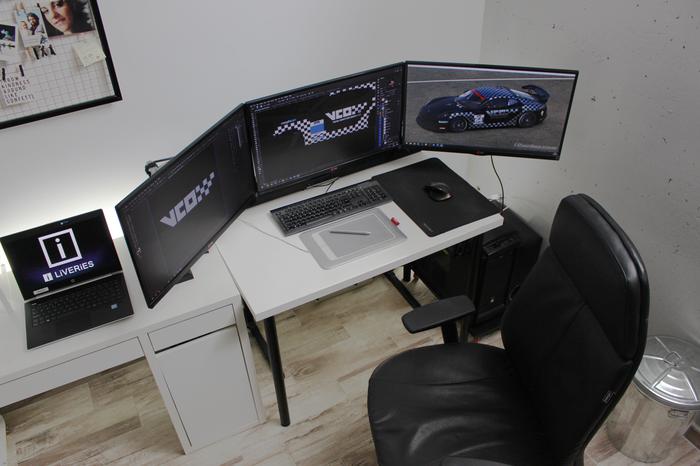