Munich – After three days of spectacular racing on three different sim platforms, the first Esports Racing World Cup (ERWC) hosted by Virtual Competition Organisation (VCO) has been decided. On the final day on the iRacing platform and the virtual Okayama Circuit, Team Redline secured the overall win against a strong field in this innovative Esports tournament. The team, with the drivers Enzo Bonito, Kevin Siggy, Chris Lulham, Patrik Holzmann and Jeffrey Riedfeld, started the tournament from third on the grid on Friday, and followed that with two wins on Saturday and Sunday. Victory on Sunday was brought home by Bonito, Lulham and Holzmann, when they prevailed over Jamie Fluke, Juan Bustamante and Johann Harth of Apex Racing Team in the finale.

A total of 22 teams with drivers from all over the world took part in ERWC I. The top five teams in the overall standings (Team Redline, R8G Esports, BS+COMPETITION, TRITON Racing and Veloce Esports) and the best-placed teams in each of the daily classifications receive a total prize fund of 50,000 US dollars awarded by VCO. There is also a special prize for the Most Valuable Driver of ERWC I, the driver with the most podium finishes over the three days of the tournament. This was tied with Bonito, Siggy and James Baldwin (Team Veloce Esports) each finishing on the podium six times. The community raised the funds for this special prize of more than 1,000 US dollars via the FundRazr crowdfunding platform.

The third and final day of ERWC I on iRacing saw the supercar Holden ZB Commodore in action. Once again, the Okayama racetrack was chosen shortly before the start of the event by track vote on VCO’s social media channels. On days one and two, the teams raced on Assetto Corsa Competizione (ACC) with the Mercedes-AMG GT3 and on rFactor 2 with the Formula Pro in Silverstone. The community was able to watch the races live on Twitch and YouTube.

“Congratulations to Team Redline on winning this historic VCO Esports Racing World Cup,” said Florian Haasper, CEO of VCO. “With ERWC I, we dared to take a risk and branched out in a totally new direction. The tournament format with three days on three different platforms with three different cars and the large number of individual sprint races was totally new to the community to start with, but the feedback we received was enthusiastic and we showed that sim racing is an exciting, extremely varied Esports discipline. I’d like to thank everyone who contributed to making this premiere a success: the platforms ACC, rFactor 2 and iRacing, our partners RaceSpot TV, The Sim Grid, P1-Gaming e.V., and of course the 22 teams who took part with their more than 100 drivers, who were extremely passionate and dedicated. Our work now continues. We will use our experiences with ERWC I when planning our next Esports projects, notably the Esports Racing League, set to launch in March.”

In the ERL, as of March, teams are invited to qualify for the second edition of the world cup – ERWC II – at the start of next year in three season cup series (spring, summer and autumn), each consisting of four-race events. There will be a total prize fund of 50,000 US dollars up for grabs in the ERL.

Heat 1:
The final day of ERWC I started much the same as the other two days, packed full of action, duels, spins and collisions. Team Redline, in the lead after two days and winning on Saturday, dominated the first heat – Bonito, Lulham and Holzmann crossed the finish line in P1 to P3. That saw Team Redline secure their place in the quarter-final. The other teams who qualified directly were CoRe SimRacing, Logitech G Altus Esports, TRITON Racing and YAS HEAT. The teams which had to compete in the Second Chance race were Arnage Competition, Veloce Esports, M1RA Esports, Top Racing, Unicorns of Love and Ballas Esports.

Heat 2:
The other eleven teams battled to qualify for the quarter-final in Heat 2 and was as turbulent as ever. The best team performance came from Apex Racing Team, followed by BS+COMPETITION and Williams Esports. The previous day’s finalist R8G Esports supplied the race winner, Maarten van Loozenord, and, as the fourth-placed team, qualified – as did Team Fordzilla. Buttler-Pal Motorsport, Rocket Simsport, Burst Esports, Jean Alesi Esports Academy, Patrick Long eSports and Carbon Simsport had to take part in the Second Chance race.

Second Chance race:
The gloves were off as usual in the Second Chance”race in the battle for the final two spots in the quarter-final. These went to Top Racing and Veloce Esports. Arnage Competition won the race with Ricardo Rico, but were one of the ten teams who failed to qualify.

Quarter-final:
The big field made up of twelve teams of three drivers each was close together at the Okyama Circuit in the quarter-final – and it wasn’t long before there was a mass collision involving a large number of cars, making what was already a very close battle for the six places in the semi-final even more exciting. Once again, the best team was Team Redline, who took the race win with Lulham. The other five teams in the semi-final were Apex Racing Team, CoRe SimRacing, Logitech G Altus Esports, TRITON Racing and YAS HEAT. The teams eliminated were BS+COMPETITION, the previous day’s finalist R8G Esports, Williams Esports, Team Fordzilla, Top Racing and Veloce Esports.

Semi-final:
In the semi-final, Team Redline once again made clear their intentions to win the day. The trio of Lulham, Holzmann and Bonito led the race from start to finish, which saw them secure not only a place in the final for Redline, but the overall win in ERCW I as well. Behind them, the other teams were embroiled in a hotly contested battle for the second spot in the final. Apex Racing Team came out on top, while day three came to an end for CoRe SimRacing, TRITON Racing, Logitech G Altus Esports and YAS HEAT.

Final:
Team Redline was declared the overall winner of ERWC I after the semi-final, so then it was on to Best-of-Three mode to decide the day win. Redline and Apex Racing did battle for every last metre and staged a thrilling finale. In the first race, Lulham was the first to see the chequered flag, and Redline took the lead 1-0 with a narrow points advantage. In race two, which started in reverse order, there was a collision involving several vehicles right at the start. Apex Racing drivers Harth and Fluke took and held onto the lead to the end, which saw the team draw level at 1-1. In the crucial third and final race, Team Redline closed the deal with Holzmann and Lulham in first and second place, securing the day win once again.

Enzo Benito (Team Redline): “I am super happy about the overall win. We deserve it, I think. It’s not easy to switch sim day after day but the team helped me a lot and I am very proud of them. I could not have done these three days with them, for sure. The format is very unique, I like it a lot. It’s good to see this kind of transition between all these simulators because usually you say ‘this is the best team in the world’. But then actually people come and say ‘yes, but this is the best team in the world only on this simulator’. So it is actually great to have an event like this. It really shows what a guy is capable of doing on the different sims. It’s crazy, it’s very unique and I hope there is a lot more to come like this.”

Chris Lulhalm (Team Readline): “The preparation I put into this was completely worth it, especially learning a whole new car for today. It has been so mentally tempting, this car in specific. But no, I am really enjoying the atmosphere and obviously the results we’re getting.”

Patrik Holzmann (Team Redline): “We had a lot of fun but we are also drained mentally. What three days that has been! The team once again proved that it’s probably the best in the world and I am super proud that I was able to represent them today and that we also won this iRacing day on top of the overall standings. The main thing of this tournament is damage limitation on your weakest game and that is what we did. The guys did a phenomenal job with pretty much no experience on ACC and then they won rFactor. It was just a phenomenal team effort. Everyone is working together, everyone is cheering for each other, it’s such good vibes in the team. I am super proud of them.”

The ERWC I overall standings at a glance: 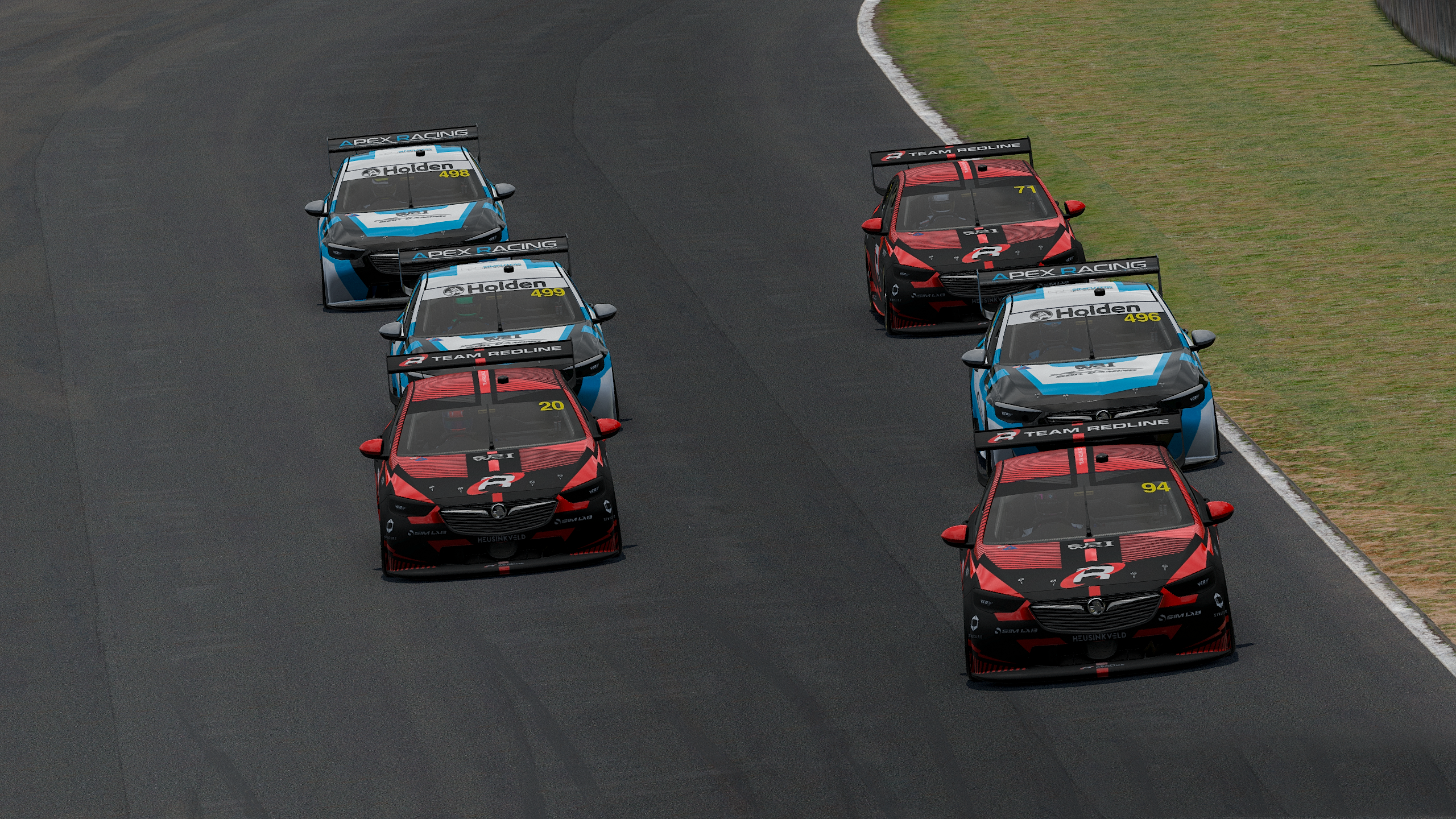 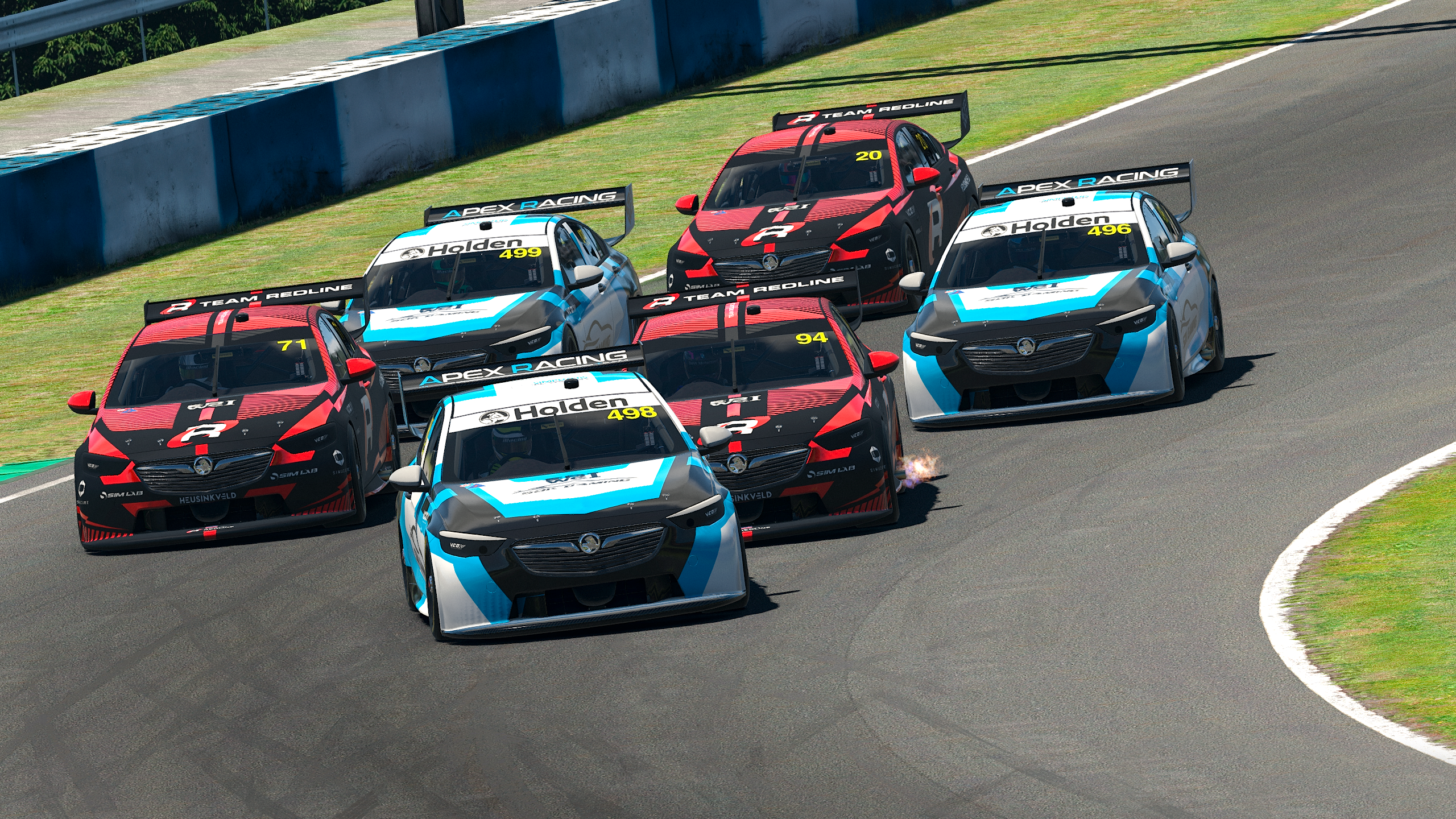 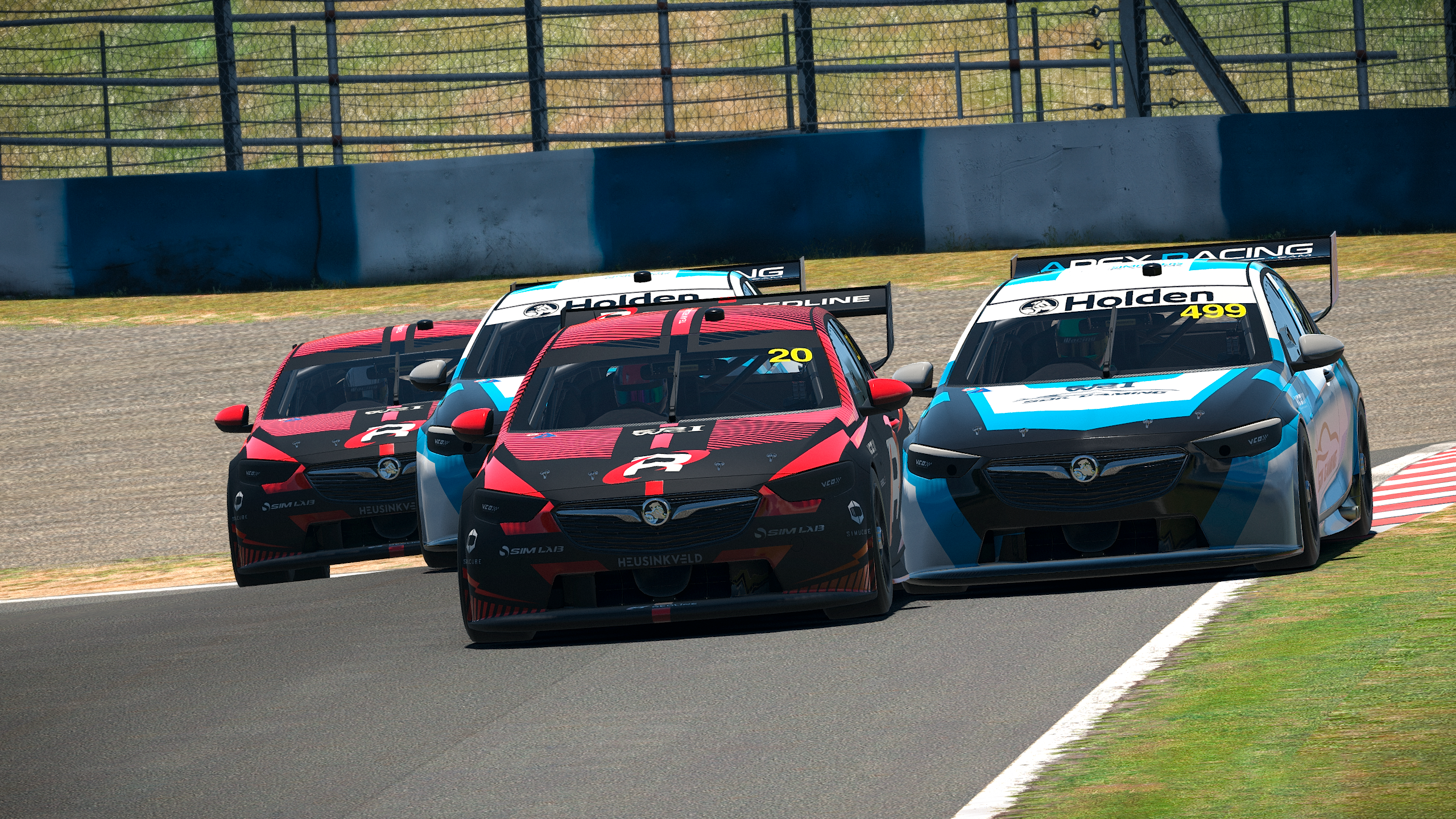 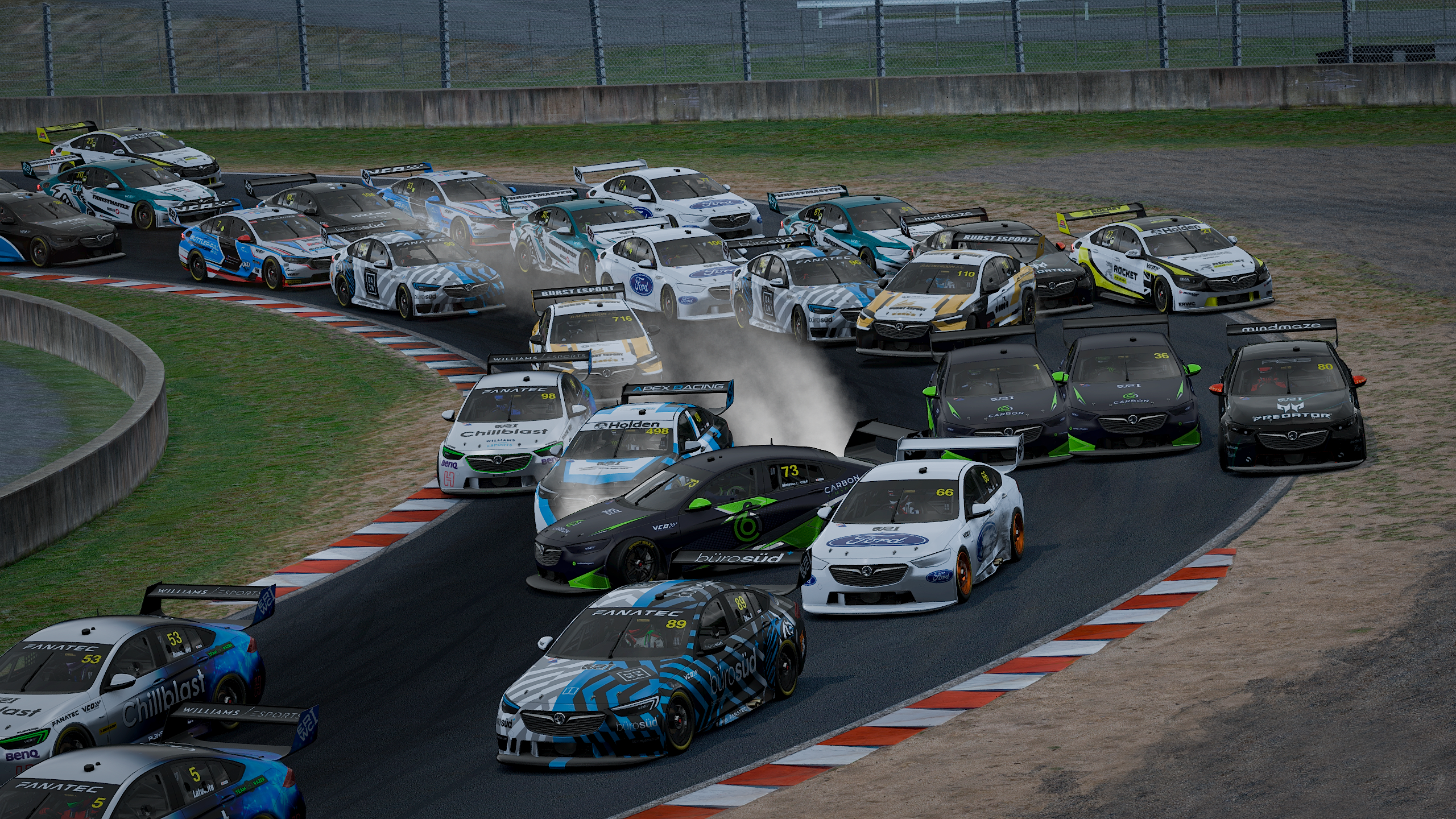